Two camps of thought on going Dual Faction, but I would say dont go too early, you are better off waiting until late 20’s level before beginning. The main reason for this is that if you have been doing all Faction Hunts, you should of built up a decent amount of credits in each of the factions. I would recommend doing all Faction Hunt events, as you also get alot of personnel shards that help with getting personnel up to a decent level. Once you have chosen your primary faction I suggest you archive all other faction missions even if you want the resources, this will speed up the process of dual later on.

Camp 1 is to start going dual faction when you have the first locked in, this occurs when you reach 10m faction points in your primary faction.

Camp 2 is just start the road to getting rid of the minus 2m faction points on your chosen secondary faction. This will lead to a slower progress in terms of getting factions to 10m lock in, but does get you the choice of more ships. Doing this will result in the loss of 1 faction points once secured both and going for the third faction. Basically in order to get the third faction any points accumulated after 10m, will be lost in one faction. E.g. 17m Rom, 16m Kling doing Fed you will likely lose the kling depending as killing kling is fastest way for fed reputation.

Camp 1 is the best way without having to juggle what your killing too much. Target Survey’s at highest level you can manage for fastest progress on a given faction. Use up those missions you archived for each faction, at lower level stick to your primary faction missions, and archive the rest. Use these to get past the -2m rep faster. Research notoriety(Away Teams) and devotion (galaxy) to increase xp Faction bonus per kill.

Firstly in the daily Events stop doing your Primary Faction Reputation Event, secondly archive all primary faction missions, and unarchive the secondary faction missions that you have available. I kept doing the standard dailies of mining along with the swarms etc.

Do the secondary faction missions you have, the more you do the faster your reputation will increase to get over the -2million that you likely started with. There are likely to be ones that you can’t do, just keep in mind what you need to achieve them, which in most cases will be a better ship. Once you get to the point of being in the secondary factions good books (a process that took me about 3 weeks), then you will start to get dailies for the second faction. 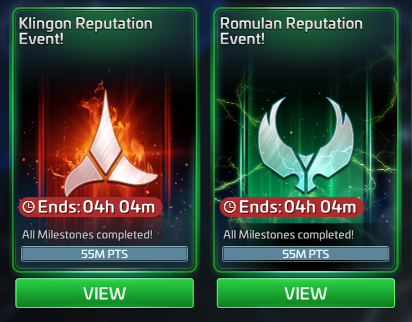 stop doing these for primary faction. Start for secondary faction only when you get back to a friendly state.

Do these and the Daily event for faction reputation (secondary faction only), until you have got the secondary faction to a level on par with the primary (preferably without a large point difference), once you achieve this you can start doing both normally, and all the ships/resources of both faction stores should be open too you at the same level. You may get a bit of a spread in faction points, as depending on the plus/minus scores for killing hostiles or events like faction hunt points gained can be removed by doing the other so the overall point gains can be a negative, or only a small positive number on both.

Spend your credits wisely, advice is spend them on faction survey blueprints initially, when you have the reputation, and after that target the Faction ships you want but almost certainly get the Faction Survey as they are better at lower tier than the Horizon, I also wouldn’t waste resources on getting 2 horizons.

Don’t just choose ones of the same level you have in your primary, you can get those later, target ships that help offer different or better bonuses. For example if you have a legion or equivalent ship there is little point getting the D3 or Mayflour, aim to buy the blueprints for higher level ships since you have a surplus of credits to spend.

In theory once you have both locked in you can then go back to the third faction not yet done and do the same thing again. This will take time, alot of it really, but should give you a higher excess of credits to spend, and doing the missions by then should be easy for all of them as you should have ships with significant stats well into the 2m range.

I went dual late 27-28 level so just Associate in primary faction, I had a lot of missions I couldn’t do, and still do with 2m+ ships for Klingon missions, I also hadn’t archived that much from earlier on in the game. Doing the missions I could, stopping the Daily Event Reputation for Romulans it basically took about 3 weeks to get from minus 2m, a further 4-6 weeks to get the Factions within a decent points difference and the dailies became the same. It helped that by killing Federation hostiles I scored on both. Doing all the faction hunts probably slowed things down a little, as did doing some events during the battlepass but the rewards out weighed the delay.

The rewards were I now at level 32ish have 2 faction survey ships for Ore and Crystal making daily mining easier I also have 2 3* ships a gladius and a brel which although slow to tier does mean i have two 1m+ ships for events and PVP isn’t so bad I just have to hit the stronger ones twice or more, so in the long run I think I will be better off, having not spent the resources levelling a saladin, Centurion or Bortas to tier 9 like alot of other players do for their 1.6M ship. The only downside is that it is taking me longer to get the Augure and D4 ships all in I suspect it will take 2-3 months with the way I am playing to lock both in at 10m and buy the blueprints. However these will take a while anyway even single faction as you need to save up the credits and they are expensive, but I should have quite the fleet by the end of it.

I should of done Camp 1 method really it would of been faster and would still have all the ships I have now. long term you are better off concentrating efforts on one or two things than getting everything. Later on at higher levels you can tier other ships and recycle once max to start getting prime researches and G4/G5 materials. I do this by spending materials on tiering ships of other factions during spend resources events or tier ship events so that at least they make something while spending the precious resources that take so long to accumulate.

We use cookies on our website to give you the most relevant experience by remembering your preferences and repeat visits. By clicking “Accept”, you consent to the use of ALL the cookies.
Do not sell my personal information.
Cookie SettingsAccept
Manage consent

This website uses cookies to improve your experience while you navigate through the website. Out of these, the cookies that are categorized as necessary are stored on your browser as they are essential for the working of basic functionalities of the website. We also use third-party cookies that help us analyze and understand how you use this website. These cookies will be stored in your browser only with your consent. You also have the option to opt-out of these cookies. But opting out of some of these cookies may affect your browsing experience.
Necessary Always Enabled
Necessary cookies are absolutely essential for the website to function properly. These cookies ensure basic functionalities and security features of the website, anonymously.
Functional
Functional cookies help to perform certain functionalities like sharing the content of the website on social media platforms, collect feedbacks, and other third-party features.
Performance
Performance cookies are used to understand and analyze the key performance indexes of the website which helps in delivering a better user experience for the visitors.
Analytics
Analytical cookies are used to understand how visitors interact with the website. These cookies help provide information on metrics the number of visitors, bounce rate, traffic source, etc.
Advertisement
Advertisement cookies are used to provide visitors with relevant ads and marketing campaigns. These cookies track visitors across websites and collect information to provide customized ads.
Others
Other uncategorized cookies are those that are being analyzed and have not been classified into a category as yet.
SAVE & ACCEPT